Our guest speaker on January 22nd was Margie Miller. Margie is the former National Exchange Club President during the 100th anniversary of Exchange.  Margie moved to  Florida from Charleston four years ago and is now a member of the Exchange Club of South Brevard. As part of her presentation, she shared with us excerpts from a speech she has previously made on the subject of “One Nation under God.”  Her topic was the price of freedom how the pilgrims who suffered religious persecution wanted to separate from the Church of England.  Their one-year voyage aboard the Mayflower brought them to New Plymouth.  All of these pilgrims knew the importance of religious freedom and the value of life, liberty, and pursuit of happiness.

Margie also shared with us information about the declaration of Independence. The original men who signed wrote and signed the declaration of Independence were all prominent men of the upper colonies. The 56 men who signed the Declaration of Independence were all from diverse backgrounds, and each of them knew that they faced the penalty of death if captured.   Many suffered personal hardships, loss of their own lives or the lives of their family members.  In many cases, their wives and daughters took over their business and farms while they were away in Pennsylvania working on designing what w now know as the United States of America.

In closing, Ms. Miller asked us to remember those who have in the past sacrificed for our freedom, as well as supporting the men and women who are today fighting wars all across the world.   We should never take freedom for granted and hold patriotism dear. She reminded us that “Freedom isn’t free.

In the early 1800’s what is now Indian River County was part of a much larger “Mosquito County.” The prevalence of fresh water and coastal wetlands in Florida and the subtropical climate of much of the state were formidable obstacles to its colonization by Europeans. These same characteristics have made the human inhabitants particularly vulnerable to a variety of mosquito-transmitted pathogens, even today. Florida has historically suffered from repeated, large epidemics of serious mosquito-borne disease, including yellow fever, malaria, dengue, and encephalitis.

The mosquito is the deadliest animal on the planet.  It transmits pathogens that the mosquitos contract from biting birds.  Over 850,000 people died worldwide from mosquitos in 2018.  There are 50 species of mosquitos in Indian River County.  They lay their eggs on the soil and on the sides of containers with standing water and on the underside of leaves of plants.  They thrive in the saltmarsh and can fly as far as 40 miles.  For that reason, it is more sensible to kill the mosquito in the larvae stage before they hatch and begin to fly. One spray treatment covers an area the size of a football field.

Mosquitos are drawn to carbon monoxide.  The CDC Traps utilize carbon monoxide to trap, freeze and study them.  Mosquitos prefer to feed on birds, so the IRMCD has 8 flocks of chickens that are monitored in their facility.

To prevent raising your own mosquitoes:

Eric Boskovich, Culinary Arts Director at Sebastian River High School received a check for $1000.  This will assist in purchasing the foods that the students prepare.  The students get hands-on learning skills in this academy and learn the protocol for serving and catering events.  Eric was deeply touched and so thankful for our support.

Our April 15th meeting will be held at Sharky’s Café at the high school.  Our Student of the Year and Ace Awards recipients will be honored at that meeting. 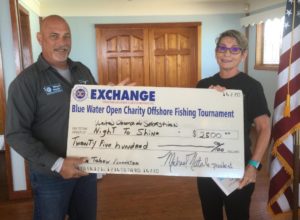 We also awarded Wendy Guy from the Tim Tebow Foundation Night to Shine event to be held on February 7th with a check for $2500.00.  This prom-like event is sponsored by the United Church of Sebastian for special needs children.  The night features a King & Queen and Paparazzi making the evening “all about them.”  This year they expect to have 125 in attendance.

We have money in the foundation account to spend – if you have a suggestion that fits our cause, please submit your request to a board member! 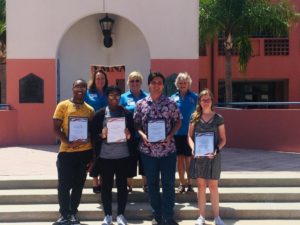 At the January meeting, discussions continued concerning opportunities for growing the club:  a booth during lunch on January 27th was held with several new members obtained.  An incoming Freshman Recruiting Night is planned in February.  Future volunteer opportunities include a drive for literacy month, and mentoring SCJHS club on March 4th (Pillars – Youth and Community),  volunteering at local events/festivals to include Jr BWO in March and BWO in May.  (Pillars: Youth and Community)

Meetings are now held on Tuesdays of each week immediately after school at 2:00 p.m. School Advisor Jaime Sturgeon has been instrumental in launching this club at SRHS.  Contact Bill Middleton, Kathy Burns, Margie Duffell or Terry Gardner if you are interested in helping with the SRHS Excel Program.

SCJHS Principal William Dodds and Advisor Tammy Cruz have been very supportive of this club.

On  January 15th in honor of National Law Enforcement Appreciation Day members made thank you cards/posters for their school’s Resource Officer.  (Pillar – Americanism)

On March 4th our member Officer Donald Hart will be speaking to the club on the accomplishments that he and his father have contributed to the Gifford community.

Meetings are held on the first Wednesday of each month. If you are interested in helping with this Junior Excel Program please contact Bill Middleton, Kathy Burns, Margie Duffell or Terry Gardner.